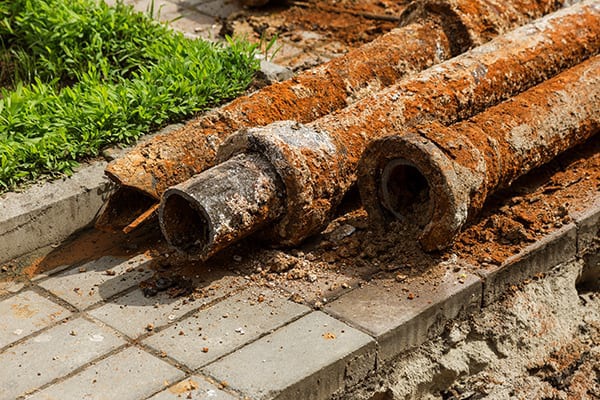 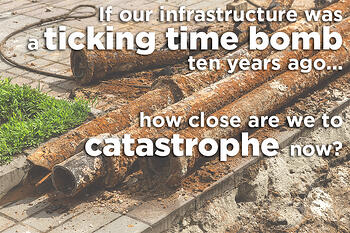 That our national sewage and water infrastructure is in dire shape is no surprise to anyone – nearly ten years ago, the New York Times wrote an article warning of the then 240,000 estimated water main breaks occurring each year, marveling that, in some parts of the country, portions of water systems were made of ancient, and fragile, wooden pipes.

The article called the crumbling of the country’s infrastructure a “ticking time bomb” that was, for the most part, being ignored by all but those who dealt with the fallout on a daily basis – city administrators and utility employees.

If our infrastructure was a ticking time bomb ten years ago, how close are we to catastrophe now?

The American Society of Civil Engineers has given the country’s water systems a D grade, warning more than two trillion gallons of treated water is lost to water main breaks every year and emerging contamination issues threaten the quality of drinking water.

Six billion gallons per day are lost to leaking water lines, enough to put Manhattan 300 feet under water over the course of a year, and climate change-induced record summer highs make warm weather repair weather as increased demand and dry, shifting soil wreak as much havoc as icy blasts.

Flint, Michigan, and its water crisis is four years in the past – although residents are still using bottled water – but in only the last few months, several large U.S. cities have found measurable amounts of lead in their water systems.

Utility officials are searching for funding to replace water mains, let alone service lines on private property. The American Water Works Association estimated that nearly $2 trillion must be invested in our water system by 2050, noting that replacement needs are greater in the northeast and Midwest, but the south and west are need investment in expansion. Small and rural communities may be the hardest hit, depending on the age and condition of their system, and homeowners could see their water bill increase by between $300 and $550 as utilities try to meet infrastructure investment needs.

The best that many cities can do, with no money to help residents replace lead service lines and no record as to where they may be, is to require a full replacement when a lead line comes to light. Even that puts a financial burden on residents who may not have realized service lines are their responsibility and prepared for a replacement – nearly 60 percent of homeowners either believe their utility is responsible for service lines, don’t know who is responsible or erroneously believe their homeowner’s insurance will cover it.

“We needed to find a solution for our residents, because they could be faced with unexpected, and high, repair bills,” Shonte’ Eldridge, Baltimore Deputy Chief of Operations, said about the city’s approach to the issue. “You can understand having a break in something you didn’t know was your responsibility, and then having to come up with thousands of dollars to keep from going without water or sewage service, was a huge issue.”

That’s where the NLC Service Line Warranty Program comes in. The program educates homeowners about their responsibility to maintain their service line and provides an emergency home repair plan through partnerships with municipalities and utilities.

“We get the calls,” Frank Hough, Darlington County Water and Sewer general manager, said. “‘I was in the shower, I don’t have any water.’ The only thing we can tell you is that you have a leak, and it’s up to you to find it and fix it. [They] filled the void where we were able to offer our customers the option of getting coverage beyond the meter. We’re happy to offer our customers options, where, before, they had none.”

The program has call centers in Chattanooga, Tennessee, and Canonsburg, Pennsylvania with more than 400 seats, available 24/7/365. The bilingual, around-the-clock call centers was one of many reasons Baltimore partnered with the program.

“If it’s 3 a.m., and a customer has a sewer back up, you don’t want to tell them they have to wait,” Eldridge said.

The program has a country-wide network of licensed, insured and fully vetted contractors, ready to help customers at any time. Network contractors must maintain an A rating with the Better Business Bureau and a high customer satisfaction score based on after-job reviews.

“As a company, we’re always looking for three things: service, quality and value,” Michael Luu, California Water Service Company vice president of customer service, said. “When you have a service line, you want to make sure you’re protected, because a lot of these damages can result in thousand-dollar bills that you have to pay for. When something does happen, they have a full list of contractors they’ve vetted already.”

As the NLC leads the charge to Rebuild With Us with sustainable investment in local projects through local-federal partnerships and expanded revenue tools, we also invite you to rebuild – both on the public and private side – with us.

To learn more about our educational programs and our emergency home repair plan for sewage and water infrastructure, please contact us.