Now is the Time to Think About Frozen Pipes 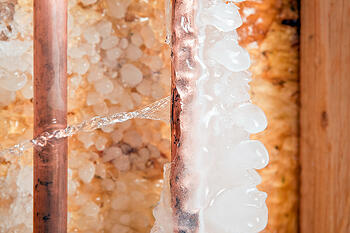 Summer is ending – time to think about frozen pipes. As the weather begins to cool and we enjoy all those pleasures that come with fall, don’t forget that homeowners should be preparing so they don’t encounter an unpleasant surprise. On average, a quarter million homeowners experience frozen plumbing each year.

With cold weather comes the risk of frozen pipes, and last year’s polar vortex meant there was a spike in plumbing problems. Some of the northernmost U.S. states and parts of Canada saw such a cold winter that ground frost caused service connections to freeze.

In Red Lodge, Mont., city officials made allowances for dripping faucets and passed out gallons of water and buckets for flushing the toilet to those unlucky residents whose service lines were frozen solid. Some cities, like Saskatoon, helped unthaw service lines by forcing heated steam into the ground, but lines serving fire hydrants came first. City leaders expect the problem to continue – in fact, they are designing a model to determine what areas are most at risk for service lines freezing.

To prevent interior pipes from freezing, homeowners should insulate spaces such as attics and crawl spaces, seal areas that allow drafts and keep their homes at or above 55 degrees. If pipes do freeze, homeowners should open taps to relieve pressure on the pipes and apply heat by using heating tape or a space heater. Using an open flame is dangerous and can result in a house fire, which is much worse than frozen pipes.

If pipes freeze, there’s a chance that the pressure build up in the pipes may cause them to rupture. In that case, homeowners should turn off water at the main shutoff valve, usually at the point where the water enters the house, and call a plumber immediately. No pipe is immune to freezing, and even a small crack in plumbing can spew hundreds of gallons of water, damaging the home, furniture and property. Water damage can cost thousands of dollars and cause mold to develop.

Residents in your community may not have considered that, during a cold snap, plumbers may be in high demand and short supply, meaning they may be without water or partial use of their facilities for several days. Depending on how extensive the loss of water is, residents may be forced to relocate until service is restored.

The Program is provided at no cost to cities, and partner cities can receive royalties based on participation.

To find out how you can help your residents achieve peace of mind, contact us.