Imagine A Day Without Water 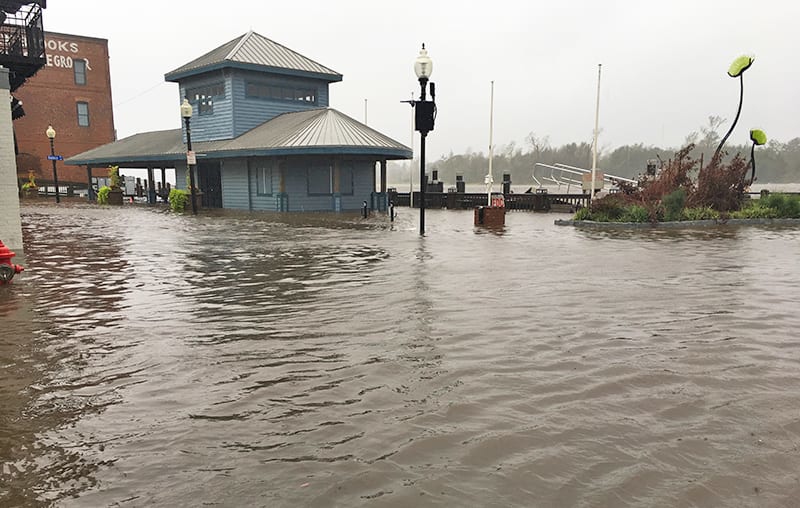 It was 11 p.m. Sept. 14, and the Cape Fear Public Utility Authority had a problem, one that could be described as either as small as a 48-inch raw water pipe or as large as a hurricane. These two things, the raw water pipeline and Hurricane Florence, had come together to threaten Wilmington’s potable water supply.

The pipe that supplied up to two-thirds of the drinking water from Cape Fear River to Wilmington’s Sweeney Water Treatment plant ran beneath U.S. Route 421 – and that road was disappearing as flood waters rose. Worse yet, the crown of the pipe was visible because the road was washing out.

Jim Tayson, Cape Fear Public Utility water distribution and construction superintendent, knew that, given enough time and water, the supporting soil around the pipe would wash away and the raw water line would break. Once that happened, those residents riding out the storm in the city would be without clean water to drink in addition to the myriad other problems brought by Florence.

Then came word that a fallen tree had pierced a pipe at a storage tank serving a hospital, and the tank was draining.

Authority officials had to make a decision: alert ratepayers and advise them to conserve water or work through the night to fix both problems. They decided on repairs.

“Most of the people in the county do not realize how close they are to losing this service that’s provided to them, and they don’t realize what we’re out there doing and how close they’re coming to going two, three or four days without water,” Tayson told the Carolina Public Press.

By building a berm of heavy roadbed soil around the raw water pipe, the crews were able to divert the water and save the pipe.

The Cape Fear Public Utility employees came together in a high-stakes, high-drama moment and were able to snatch an unsung victory from the jaws of defeat, but now that the flood waters have receded, the situation for struggling utilities across the storm’s path isn’t pretty.

The Public Press analyzed operating revenues, expenditures and debt service across North Carolina and found nearly a quarter of water and sewer systems are coming up short. And that was before Florence wreaked havoc on the state.

Those systems coming up short do the only thing they can do: defer maintenance. As regulations and training become more in-depth and resources become scarce, more systems are feeling the pinch, and not only on the southeastern seaboard, but across the country.

The American Society of Civil Engineers has given the country’s water systems a “D,” citing inadequate funding and not enough revenue generated to meet maintenance needs and upgrade systems. Most systems serve small populations – 83 percent of them serve just 8 percent of the population – and don’t have a large pool of ratepayers to shoulder the burden of needed maintenance. Not only is funding inadequate, but the system is reaching the end of its useful life. There are an estimated 240,000 water breaks each year in our aging system, causing $6 billion in associated costs.

These growing forces on our country’s water systems are creating a perfect storm that will result in many days without water across the country – the only questions are when and where.

Congress is not unaware of this problem, and the Senate’s Environment and Public Works Committee has passed a water infrastructure bill, S.B. 2800, America’s Water Infrastructure Act, which will now be considered by the upper chamber, and the House of Representatives is considering a similar bill, H.R. 8, the Water Infrastructure Improvement Act.

The Water Infrastructure Improvement Act is meant to address concerns about Clean Water Act funding issues and establish an ombudsman to collaborate with communities on planning and compliance. It is supported by the National Association of Counties.

The Senate bill is intended to cut red tape and increase infrastructure investment, while providing drinking water pilot programs for indigenous tribes, where 7.5 percent of Native American and Alaskan Natives have no access to clean water or sewage systems, in comparison to the 1 percent in the country overall. Every day, in the richest country in the world, there are people living without drinking water and suffering from diseases such as strep throat, caused by a lack of access to sanitation.

These tribes and small villages are fighting for the same dollars as those in Flint, Michigan, where, after four years, the tap water still has toxic levels of lead. The 100,000 residents of Flint have spent roughly 1,460 days without water.

Lead main lines aren’t the only source of toxic metals in water supplies – many communities, especially those with a higher proportion of older homes, have lead service lines. Some communities have taken the prudent step of requiring lead service lines to be replaced, instead of patched or repaired. Despite the clear health benefits, this has a financial downside for the homeowner.

For information about how this program can help protect your residents, contact us.