Economic Shock is Hidden Threat to One-Third of Americans 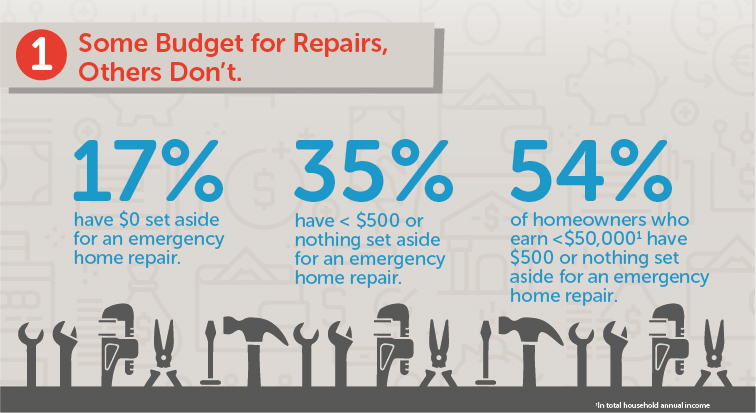 Economic shock, a large, unexpected expense such as a home system repair or sudden loss of income, is a hidden threat to your community. You may be surprised at how many of your neighbors are living paycheck to paycheck and how few have any savings set aside for an emergency.

If one of your constituents has an economic shock, they may turn to your municipality for help. How will you be prepared?

Many Homeowners Are Unprepared

While some Americans save, others either don’t or are unable to, leaving them vulnerable to economic shock.

More than one-third of Americans have $500 or less set aside for an unexpected financial demand, and that percentage jumps to more than half among those who have an annual income of $50,000 or less. Approximately 60 percent are living paycheck to paycheck, according to a Charles Schwab study. In addition, The Pew Trust estimated 60 percent of Americans had a financial shock in the prior 12 months in a recent study.

That’s 60 percent of your community that will have difficulty weathering an economic shock – and 50 percent of your residents will likely have some sort of emergency home repair in a 12-month period, according to the HomeServe Biannual State of the Home Fall 2019 survey.

The Biannual State of the Home

Nearly 70 percent of Americans would like their utility to provide an optional emergency home repair plan to help them avoid financial shock.

The Biannual State of the Home Survey reports the financial impact of home repairs, the state of the American home and researching the latest home ownership trends. In the fall 2019 edition, the survey found more than one-third of homeowners would prefer a deductible-free emergency home repair plan similar to HomeServe’s offerings. The number was double that of those homeowners who would prefer to pay a rider on their home insurance offering a deductible. In addition, 69 percent of homeowners would prefer their local utility to offer an optional emergency home repair plan from a third party.

Many Homeowners are Uncertain

In a previous State of the Home survey, more than 40 percent of homeowners surveyed didn’t know they were responsible for maintaining their service lines, with 18 percent unsure who was responsible. Another 11 percent erroneously thought their homeowner’s insurance would cover the repair expense. In addition, 13 percent believed the city or utility was responsible.

If your residents don’t know who is responsible for maintenance, they will likely contact you. Then you have the unenviable task of telling them they’re on the hook for a repair they can’t afford.

See other municipal officials talking about receiving the worst call from residents here.

Residents can avoid situations like these if they are aware of the risks of service line failure. You should encourage them to prepare themselves against a potential economic shock. An educational program meets with approval from the 88 percent of homeowners who believe their municipality should educate them about their responsibilities.

To learn how you can educate your residents in their responsibilities and help them avoid financial shock, contact us.